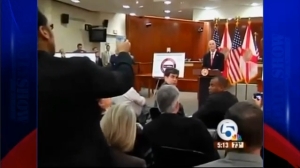 A federal District Court has issued a final judgment declaring that Florida’s law requiring beneficiaries of the state’s Temporary Assistance to Needy Families program to take a drug test, violates constitutional protections against unreasonable search and seizure. Judge Mary Scriven of U.S. District Court for the Middle District of Florida ruled that the “warrantless, suspicionless drug testing” at issue could not be constitutional under any circumstances.

The plaintiff in the case was Luis Lebron, a U.S. Navy veteran who was also a full-time student and caretaker for his young son and disabled mother when he applied for assistance. Lebron refused to submit to a drug test and the ACLU of Florida took on his case. The court’s decision follows a preliminary injunction that halted enforcement of the 2011 law months after it went into effect.

The court’s decision makes it worth revisiting the excellent Daily Show segment about the law. Correspondent Aasif Mandvi took the law to its logical conclusion, asking Governor Rick Scott, who campaigned for the law, to submit to urinalysis himself.

Notes on Law and Justice